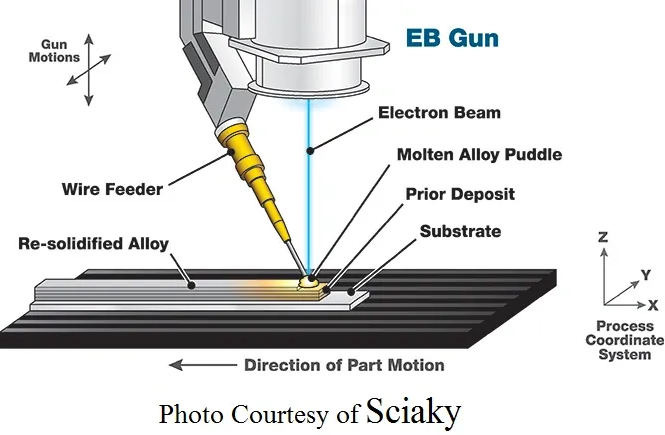 The Electron Beam Additive Manufacturing (EBAM) process,  which is exclusive to Sciaky, Inc., utilizes wire feedstock and an  electron beam heat source to produce a near-net shape part inside a  vacuum chamber. Starting with a 3D model from a CAD program, which is  converted to CNC code, Sciaky’s electron beam (EB) gun deposits metal,  via the wire feedstock, layer by layer, until the part reaches near-net  shape. Once the part reaches near-net shape, it undergoes finish heat  treatment and machining. The process itself is scalable for components  from millimeters to multiple meters in size, limited only by the size of  the vacuum chamber.

The following is a list of some of the raw material available in wire feedstock that EBAM works with.

The capability to achieve predictable and repeatable operations is  important for wirefeed AM, and this is needed to increase the stability  of the deposition process. [8] Sciaky’s patented IRISS® Closed-Loop Control technology  is the brains behind EBAM. It provides consistent part geometry,  mechanical properties, microstructure, metal chemistry and more, from  the first part to the last part.  As for the brawn, EBAM gross deposition rates range from 7 to 25 lbs.  (3.18 to 11.34 kg) of metal per hour, depending upon the selected  material and part features, making it the fastest metal additive  manufacturing process in the market. The reported maximum deposition  rate of laser-based wirefeed is 48.0 g/min, which translates to 6.4 lbs.  (2.9 kg) per hour. [8] Typical SLM and EBM metal powder AM approaches,  on the other hand, produce 0.22 to 0.44 lbs. (0.1 to 0.2 kg) per hour.  [7] In addition, powder-fed laser directed energy deposition methods  (i.e. blown powder techniques) top out around 5 lbs. (2.27 kg) per hour.

Sciaky, Inc. began developing the wirefeed EB process back in the  mid-1960s.  The process was further refined to build jet engine knife  edge seals in the 1990s, [10] and, in the early 2000s, the EBAM process  was developed to help manufacturers save significant time and money on  the production of large, high-value metal parts. In 2009, Sciaky  formally launched the EBAM process (which was then marketed as Electron  Beam Direct Manufacturing) as a service option. In 2011, Sciaky was  selected by Lockheed Martin Aeronautics for the Department of Defense  (DOD) Mentor-Protégé Program with the focus of this agreement being the  additive manufacturing of titanium structural components for Lockheed  Martin’s F-35 aircraft program. In 2012, Sciaky entered a partnership  with Penn State University, via DARPA (Defense Advanced Research  Projects Agency) funding, to advance Direct Digital Manufacturing (DDM)  technology with the goal of advancing and deploying DDM technology for  highly engineered and critical metallic systems to the Department of  Defense (DOD) and U.S. industry. In 2014, Sciaky began delivering  turnkey EBAM systems to the commercial market. Lockheed Martin Space Systems was among the first customers to receive an EBAM system for developing and producing 3D printed titanium propellant tanks.